Preserving a Cultural Foundation Through Passion

Farming numbers can add up exponentially; consider the US Department of Agriculture estimates Mexico’s 2020-2021 corn production at 27.8 million tonnes.

Factor in rough estimates of 39 bushels of corn per tonnes, and 48 ears of corn per bushel, and 800 kernels per ear of corn, that means Mexico produces more than 4 trillion kernels of corn each year.


If it’s hard to wrap your head around thinking that big, try Mexico businessman Rafael Mier’s approach of considering the small. Rafael believes so strongly in Mexican corn that he says, “We don’t want a single kernel lost.” He is on a quest to help his country believe the same.

Planting A Seed Of An Idea

Rafael Mier has always found stories in numbers. He studied business administration, earned an MBA in Spain, worked as a consultant, and eventually became the Chief Financial Officer of Mexican furniture and interior design company MarqCo. It was much business as usual, until one day he sat down for lunch with his extended family and his life unexpectedly changed course.

Rafael says, “My nephews, nieces, brother and sister, we were having tortillas and I realized most of the people closest to me did not know how to make tortillas. I was very disappointed and very sad. I thought, what is missing?”

What Rafael saw at his family’s table was something happening across his country. Mexico is thought to be the home of corn—stretching back at least 7000 years. For hundreds of years, tortillas have been a key product of that corn. But over the past generation, as Mexican diets changed to include more bread and fast food, tortilla consumption dropped dramatically--by some counts, by nearly 45 percent. Rafael believes those numbers harm more than his country’s economy. He says, “Mexico is a country built with corn. Corn is our past. It is our present. Most of our traditions, our food, our family, our gatherings—corn is always there with us.”

Rafael started writing articles advocating for corn and tortillas but had limited success finding journalists willing to listen. So about six years ago, he turned to social media and started publishing daily articles. More than 14 thousand people followed his Instagram account; he got about 450,000 followers on his Facebook page. Before long, Rafael’s part-time passion project turned into a full-time job as he quit his CFO job and founded Fundación Tortilla, a non-profit organization dedicated to improving the state of corn in Mexico.

Fundación Tortilla’s mission is simple: “promote the culture and consumption of corn and tortillas as fundamental elements of national well-being.” Living into that mission is more complicated Rafael explains a multi-faceted approach ranging from conserving heirloom corn’s biodiversity, working with the government to influence agricultural policy, and educating people about the benefits of corn and tortillas.

Rafael has led workshops and courses with audiences including farmers and chefs. He shares his own story of trying to recover an heirloom popcorn variety as proof of how easily corn history could be lost, and he encourages promoting the health benefits of tortillas made without additives or preservatives. He says changing how tortillas are labeled would be good for Mexico’s more than two million corn farmers and good for people’s health. Rafael is an advocate for tradition—and for technology.


Rafael realized when talking with corn producers and tortilla makers that preserving the corn was difficult in Mexico’s hot and humid environment. Many farmers reported moths and weevils would attack the corn as they stored it. In fact, Rafael says, recent research suggested more than Mexico lost more than four percent of its crop after harvest. Rafael thought that was too much corn gone, too much economic power disappeared, and he started looking for options to preserve more grain.

Rafael says he found his solution when he discovered GrainPro; he had heard about coffee growers using GrainPro hermetically sealed bags to preserve the quality of their beans; He knew friends who exported grain who used GrainPro products to ensure their corn arrived in the US in good condition. Rafael also saw the importance of a product which could preserve humidity at a very precise level required for popcorn. He began recommending GrainPro products to all who take his in-person and online classes because he says he sees the difference the storage solution can make.

Rafael says, “Traditional techniques are not so efficient to keep corn for a longer period of time. We can use these GrainPro technologies to keep our corn for a longer time. If they are accessible, they are affordable, that’s great. That’s what we need.”

Planning For The Future

When Rafael Mier shares his favorite tortilla recipe, the list of ingredients is short; the instructions are long. Doing things right takes time, just as it has for generations. Rafael approaches Fundación Tortilla mission for Mexico in the same way. “We are made of corn. It is our most important cultural element,” he says. He believes there is nothing more important than helping people re-appreciate an ingredient key to their food and their foundation—a kernel of truth ready to grow again. 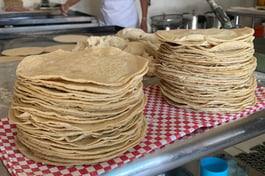