Agricultural innovations: A Ray of Hope for Farmers

When Farhan Tahir, the Director of Commodity Storage at Haji Sons Group, went to a chili market north of Lahore, Pakistan this summer, he noticed a farmer getting extra attention from other vendors. The farmer said he had just received 25 percent more money for his red chili peppers than anyone else at the market had, and people wanted to know how he did it so they might be able to try to do the same.

The farmer told Tahir it was a two-pronged success story: he had used Haji Sons licensed seeds to get a higher yield and then used GrainPro Hermetic Bags to store his crop and prevent post-harvest loss. The hermetic technology storage solution helped maintain the chilies’ shine and color, did not require the use of chemicals, kept out beetles and fungus-causing moisture, and resulted in a high quality which attracted premium buyers. Farhan says the best part of the day was when the farmer said, “You know, I get double benefits because of you.”

Benefits matter to smallholder farmers in Pakistan. It’s one of the world’s top ten chili producers, and agriculture accounts for nearly 20 percent of the nation’s GDP. Yet as the International Fund for Agricultural Development (IFAD) points out, poverty in Pakistan hits hardest for rural residents, who account for more than 80 percent of the country’s poor. Food insecurity impacts more than one out of five people in the country, while extreme weather can create even more challenges. Farmers have small landholdings and must make the most of what they have.

In 1996, Haji Sons began selling hybrid seeds to smallholder farmers, a few years later, the company introduced greenhouses with irrigation systems. These technologies solved many production problems for farmers, yet they created another challenge: more crops to sell meant more crops to store. Many farmers simply sold their crops at the time of harvest to prevent post-harvest losses and get around storage challenges, yet that meant they were selling for lower prices in a time of high supply. Haji Sons believed being the first company in Pakistan to offer GrainPro products could help farmers reduce some of the 1.3 billion dollars in Pakistan’s annual post-harvest losses.

When the products worked for individual smallholder farmers for products like chilies, Haji Sons leaders decided to think even bigger. They are now setting up a pilot project for this growing season which allows farmers to bring their maize to community sites in two of the biggest maize producing areas in Pakistan. The maize will be stored in GrainPro Hermetic Cocoons, allowing farmers to take comfort knowing their maize is safely and securely stored, and they can get access to 70 percent of the capital of the commodity market. In other words, they can use the previous year’s crop to prepare for the next year’s crop, and still have grain left over for price appreciation. In test cases over the past few months, Haji Sons leveraged financial partnerships to enable farmers to bring more than 1300 tons of grain to sites for storage. The next step is finding processors seeking superior quality grain to buy at premium prices.

Tahir Saleemi, Chief Executive Officer at Haji Sons Group says he hopes the Cocoons will help small farmers gain access to both immediate capital and adequate storage spaces, eliminating the intermediaries who have traditionally purchased crops at low prices, then turned around and profited later by selling at higher prices. He says, “There has to be a solution where farmers can get their financing and their produce can get to consumers.” 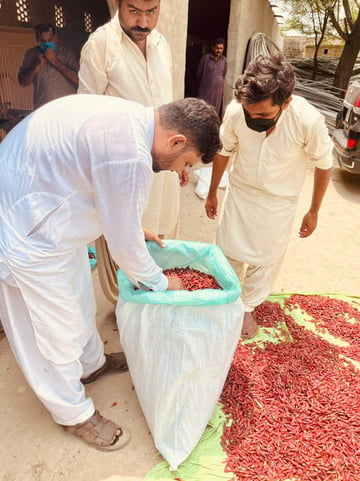 Tahir and Farhan are optimistic the storage solution is eventually as simple to find as a quick search on a smartphone. What is more, they believe these community storage solutions are scalable beyond corn to help Pakistan’s smallholder wheat and rice farmers as well. They are proud to be part of the company behind this idea. As Farhan says, “First we started off with seeds. Then we brought in irrigation because there were water shortages. Now the leading concern for the world—and for Pakistan and most developing nations—is food security and sustainability. The only way we can help improve the income of these farmers is to save these losses. Or what will happen is, who is going to feed the next generation?”

Tahir Saleemi says this pilot project is another dream for the farmers in his country he believes will be a success. He points to the chili farmer at the market who led by example with post-harvest storage success. He tells of an exporter who came to the family farm last year to check stored maize, found each bag was securely sealed with no chemicals or quality loss, and simply nodded and said, “Wow.” Tahir says that gives him the confidence to continue to innovate. He wants Haji Sons Group to persuade farmers with proven examples of profits and products better than ever, to meet a need that is greater than ever. 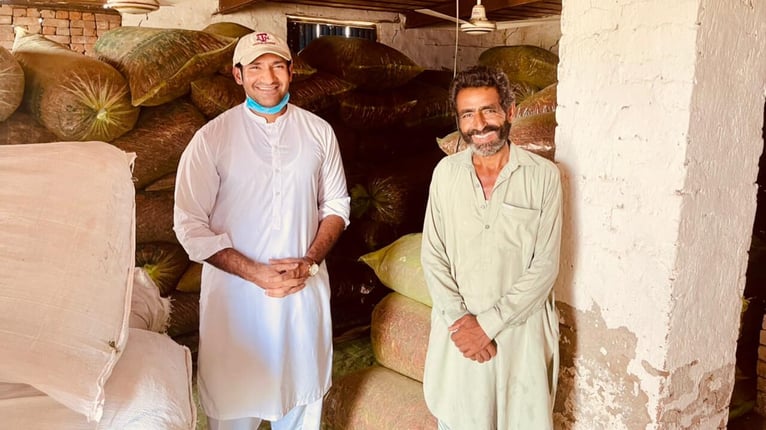 
Check out more stories from the field here ➜