Tortilleria Zepeda: Product and Purpose Wrapped Into One

There are nearly three million acres of field corn grown in Wisconsin each year, and more than 56-thousand acres of sweet corn.

But when Mexico-native Julian Zepeda moved to the Midwest to live with his Wisconsin-native wife Heidi, he looked around at the fields surrounding him and felt something was missing. He asked, “How am I going to make tortillas with sweet corn? It’s not possible.”

Julian knew if he wanted a taste of home, he was going to have to make it himself. In 2018, he and Heidi teamed up to create tortillas which tasted like the ones his grandmother made in Puerto Vallarta, sourced with organic heirloom corn grown by Wisconsin farmers. It was a recipe for success and for the beginning of their business, Tortilleria Zepeda.

Three years later, Tortilleria Zepeda products are found in more than twenty retailers and at least twenty restaurants across the state. Heidi Zepeda says it has become more than a company; it is a mission. She says, “Beyond just creating authentic, highly-nutritious food, it’s really being a part of this movement of connecting with our local farmers who are doing the type of agriculture practices that are so important for our planet.” 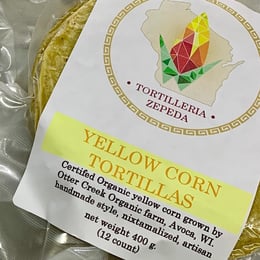 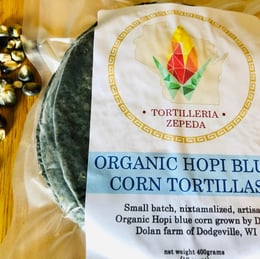 Tortilleria Zepeda’s website showcases the farmers who raise the corn varieties like “Hopi Blue” and “Bloody Butcher Red.” Heidi says the transparency matters to consumers who want to know where their food comes from. The pictures tell another story as well. The grain comes from farms in the Upper Midwest, where there is one corn-growing season per year. When Heidi and Julian buy the corn, it must last until the next harvest. It seems like a simple observation, yet the complexity came all-too clear with a food scare early in the business.

The Zepedas had purchased a pallet of two thousand pounds of an organic blue corn from another farmer. When they got a close look at the product, they realized the corn was infested by bugs, which had eaten the nutritional part of the corn. Heidi and Julian said a grain broker encouraged them to sort out the bugs, but it was not an option for them. Heidi explains, “We can’t be deceiving ourselves and our customers to give them something that is lacking the nutrition we promise.” It also meant Tortilleria Zepeda had to leave customers wanting tortillas made from that particular corn waiting until the next year. 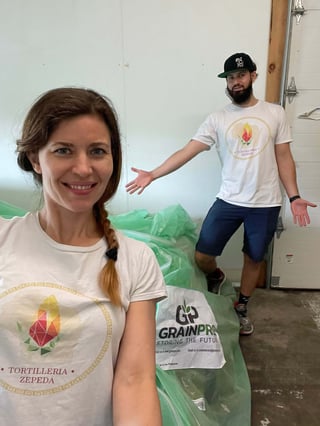 Fortunately, they say, the broker took back the grain and refunded their money so they could look for new options. That is when Julian got advice from a tortilla expert in Mexico, who recommended GrainPro bags. Now their storage facility is filled with GrainPro hermetic solutions to keep the corn fresh while protecting against insects. The bags also ensure no chemicals are needed to preserve the grain—a must-have for tortilla producers who pride themselves on organic food.

GrainPro products provide peace of mind the Zepedas did not realize they needed until it became a necessity. Heidi says, “Being new to the business, it’s something we didn’t really know about until it happened to us. Because of that, we learned how important it is to preserve the corn in optimal conditions.” 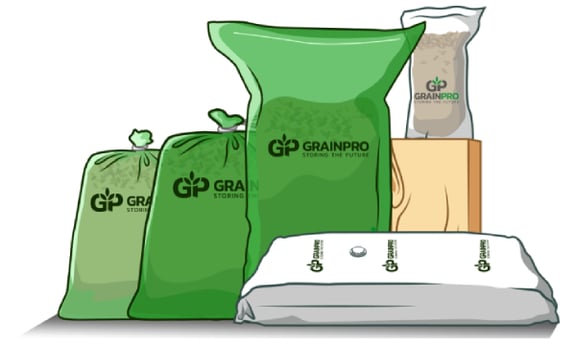 Julian and Heidi say some of their best reviews come from satisfied customers like a Mexican immigrant who was literally brought to tears by Julian’s tortillas because she said they reminded her of her cooking. And Julian’s toughest critics---his family—give top reviews, too. He says, “I took the tortillas back to Mexico for my family to try, and they were so amazed. They said, ‘How do you make this authentic Mexican tortilla with Wisconsin corn?’ They didn’t believe me until they tried it.”

The Zepedas hope to grow their company and add new flavor-infused varieties to the tortilla selection. Their other goal is nurturing a community. Heidi says, “It brings us joy to be able to be in a place where we can purchase two pallets of organic corn from our farmer up the street and say, ‘I believe in what you’re doing and I’m contributing to you improving our lands and improving our food system.’ And they feel the same way about us.” It is product and purpose, wrapped up in a way only Tortilleria Zepeda can.